Fundraising as a family! 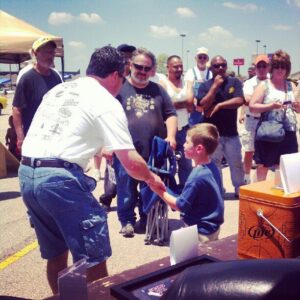 My dear wife, Terri, and I celebrated the 10th anniversary of the day we met by doing the same thing we were doing the day we met, which is fighting for a CURE for muscular dystrophy. Terri was a district director way back then and the Summer Sizzler Car Show was one of her many big events. I was her auctioneer as part of my tour as the newly crowned 2002 Oklahoma State Champion Auctioneer. It was love at first sight, and we’ve continued to make a point of helping with the event every year.

What was extra-cool this year was that our five year old son, Dalton, got to play a role in the tradition! Each year I open up the auction by thanking the crowd, some of whom have been at the auction for as long as I’ve been doing it, for everything THEY are doing to help find a cure for this disease. I always make a point of letting them know that every bid they make at the auction helps move us that much closer to a cure, and that getting to take home some neat items at a price they want to pay is just an added bonus. This year, I handed the microphone to Dalton, who made his old dad proud by saying clearly and distinctly, “Good luck on your bidding!”

As I said that day, I am convinced that by the time Dalton is a parent, muscular dystrophy will be something that you can only read about in the history books because of the help of good folks like YOU.

Thanks to all of you who were there to support the event and THANK YOU for all you’re doing to find a cure.