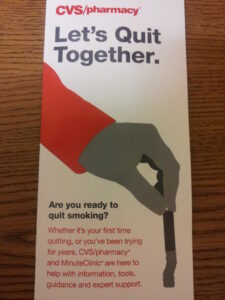 When I first wrote about CVS’s decision to end its sale of tobacco products, I praised how the decision honored their mission. I also had some concerns about how Wall Street would react to CVS’s decision, which essentially meant that it would be foregoing several million in revenue as it said goodbye to tobacco products. At least at the time of this post, it appears that the market agrees with this repositioning as a “health” company, as their share price has steadily marched onward and upward over the past few months.

CVS is now going all-in with its mission-focus of being a resource for wellness, demonstrated by a name change from CVS Caremark to CVS Health.  And they’re filling the void left by removing tobacco from its product offering by stocking store shelves with nicotine gum and other items categorized as “cessation aids,” which is a fancy way of saying “stuff to help you quit.” One example can be seen in the photo to the left.

I’ll also mention that when I noted the empty shelves behind the counter as I talked to the manager of the CVS my family uses and asked what reactions customers had demonstrated to the change, he said that overall it’d been very positive.