Thanks for the party, VI Marketing and Branding!

I guess I can pretty much forget about getting hired as a photographer at VI, huh?

Thursday may be just another AMA meeting for some, but for me it’ll mark my 20th straight year to darken the doors of an AMA meeting. I have not missed a luncheon meeting since attending my first one way back in October of 1994. I’ll be attending meeting number 199 that day (it would be and even 200, but we cancelled a meeting in 2001 right after 9.11).

There won’t be any balloons drop from the ceiling,  there won’t be any fireworks go off, and there won’t be one of those flash mobs break out that the young people today or so fond of doing or anything like that. In fact, it probably won’t even be mentioned because folks just pretty much expect to see me at the AMA any time the doors are opened, and that’s cool, too.

In a way, I kind of feel like I’ve already had a celebration, though, because Friday I was one of a select few hundred or so to attend the 25th anniversary of VI Marketing and Branding. My relationships with the stars at VI are one of the many benefits I can count as a result of my AMA involvement, and it’s been a genuine pleasure to See Tim Berney and the gang enjoy such success over our 20 years together. Way to go, guys! 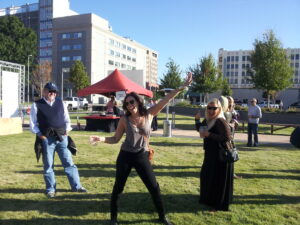 The chief architect of this shindig, Jacquelyn Lamar (AMA Past-President and marketing legend) 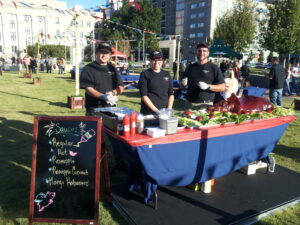 “We cooked a pig in the ground…” 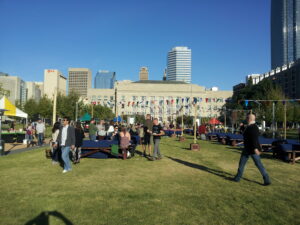 Looking back to the West…