A different look at discipline… 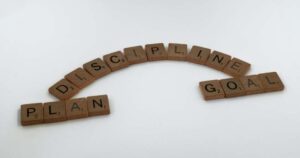 This may be the time of year when some of us are revisiting our New Year’s Resolutions. Most of us seem to know that success in achieving any kind of goal comes down to perseverance. Commitment. Discipline. Setting a goal like a new year’s resolution is easy enough, but keeping it takes discipline.

Tom Landry, the late coach of the Dallas Cowboys, used to tell his players that everyday they had to do what they didn’t want to do, so someday they’d have what they always wanted. Certainly that’s true. But the thought of a distant reward seems to become a more and more unpleasant thought when we live in a society where we’re so conditioned to instant gratification.

So why not practice some instant gratification with your goal setting?

Instead of waiting until you achieve the ultimate goal, take a moment and celebrate every time you take an action toward it. Especially if that requires that sacrifice of doing what you don’t want to do.

For example, if weight loss is your goal, next time you decide to pass on dessert, don’t be disappointed. For that matter, don’t even put the most focus on the fact that this short-term commitment will lead to that long-term goal you’ll celebrate when you step on the scale, however distant that may be in your future. Instead, why not congratulate yourself right then and there for just having the discipline to make the harder choice that moves you closer to that goal?

Adopt that attitude and you may find you not only get to enjoy the journey as much as the destination, but you may change your whole attitude toward the practice of discipline, which could in turn help you create a much more powerful habit.