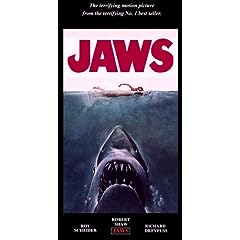 Remember that eery scene from the first Jaws movie where the woman is swimming at night in the ocean? She first feels something bump into her, then something tugs her down a couple of times, then she’s seen being dragged violently through the water, then she’s seen no more! And the scary Jaws da-dum, da-dum, da-dum da-dum da-dum theme is accompanying this terrifying depiction!

It’s a brilliant piece of suspense filmaking, but it happened that way by accident! Now don’t get me wrong, Steven Spielberg is a brilliant and highly accomplished director who had impressive credits before Jaws and has since earned himself icon status many times over in motion picture history. And it was indeed his idea to write the scenes for the opening of Jaws as is now historically known, but that opening wasn’t his first choice.

Spielberg had originally decided to introduce the shark in the very first frame. However, technical difficulties delayed the availablilty of the mechanical shark that was to be used in the movie well into the production schedule, calling for rewrites. Spielberg brilliantly rolled with these setbacks and ended up with a better product as a result. This story and many more interesting ones are told in the Hollywood documentary, Boffo! Tinseltown’s Bombs & Blockbusters

As business professionals, we need to remember that every opportunity may first come to us disguised as a threat! If we’ll take command of the situation and see what possibilities exist, we may create for ourselves a set of successful circumstances that exceed anything we originally imagined. So the next time you face a challenge or threat, get excited and then go about working to turn it into an opportunity!