Reach For The Sky? 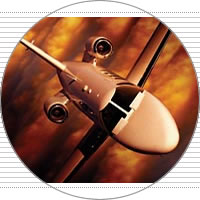 everal years ago, Cessna decided they wanted to enter the lear jet market. They had a good solid brand in the single-engine, light aircraft category, and just knew they could leverage their core competencies into success in this premium market segment. But they had concerns that the market might not agree. They feared that even though customers had confidence in their single-engine products, they might have a tough time justifying a higher price for this kind of product and might see it as just a small propeller-driven plane inside a lear jet shell.

So what they did was develop a new product with a new story. The Citation was born! They came up with a campaign that addressed every benefit sought by their target market. They answered the possible objection of the unknown, new brand name by having the fact that the Citation was a division of the established Cessna corporation as part of the signature of the messages about the product. The Cessna logo was at first presented only discreetly but has become much more prominent in recent years as the Citation brand has established itself. In fact, the Citation has become a real flagship brand for Cessna.

Sometimes when we want to enter a new market, we will find ourselves answering way too many “yeah, but’s” if we’re trying to convince or change the attitude of the market. This can lengthen an already very long and expensive process. Often, we’re better off developing a new story to tell the market in the form of a new brand.