Was The Edsel A Success? 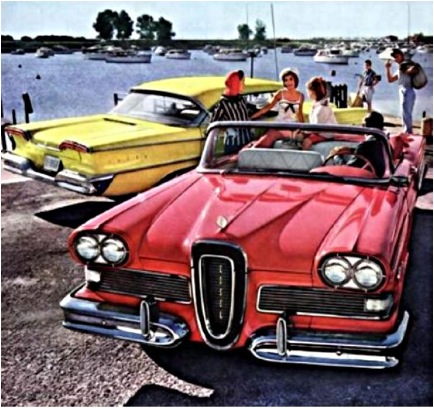 If we had to pick a category and “label” this campaign, indeed, there is an overwhelming amount of evidence to support the conclusion that the Ford Edsel was a failure. But I am not that crazy about putting things into boxes or assigning definite labels. I think there’s more profit to be derived from looking at everything as a learning opportunity.

The Edsel was a bust from the start as far as how the public turned up its nose at it, so yes, from a marketing standpoint it was a complete and utter flop. The customer IS the answer, and if the customer says “No,” then you can’t get much more straightforward than that.

On the other hand, the Edsel featured several innovations in terms of driver safety, which would be used to improve the designs of later models. From that standpoint, Ford was able to derive significant value from the investment in the Edsel and reinvest that value in future offerings for the marketplace.

Marketers call this “relative product failure.” Relative to the original goal of starting a profitable new product line, it fell short. However, It was not an absolute failure because the investment in its development paid dividends later on for the company. It’s not a bad idea for us to constantly inventory all of our “failures” and see how we can, in, fact, cash in on them. My bet is that you and I could swap quite a few stories about things that we’ve been through either in business or in our personal lives that at first seemed like disasters, and in retrospect became things that we’re grateful for today because they’ve paid off in the long run. And we’re all in it for the long run!

Success is a journey, not a destination. The doing is often more important than the outcome. – Arthur Ashe