Are We Richer Than The Rockefellers? 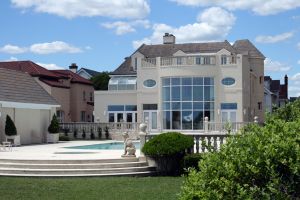 You hear a lot these days about how much more stressful it is to live in the 21st century, and certainly, each generation has its own dragons to slay. At the time of this writing, the craziness of the economy has us all wondering what the heck could be around the corner, what will help turn things around, and how quickly. But I think Warren Buffett really put it in perspective.

He was filmed for a CNBC special as he spoke to an MBA class somewhere back east a couple of years ago. He philosophized that most 21st Century Americans have it far better than even the richest Americans had it at the beginning of the 20th Century. He said proudly that, in many ways, the average American today is richer than the Rockefellers of the early 20th Century!

He explained how even the poorest of us have every basic need met, or can get access to some means of meeting our basic needs. As he put it, in typical simplified, Warren Buffett fashion, we’re cool in the summer and warm in the winter!  We have central heat and air, television, public schools, public libraries, and accessible health care. We can visit a restaurant and have a staff cater to our satisfaction. Or we can pick up the phone and have many of our favorite foods delivered right to our door. We have entire television networks and motion picture studios spending billions developing programming in an attempt to win our favor! Rich folks and even royalty didn’t have it as good a little over a hundred years ago as the average American does today!

I would further argue that, in most cases, if an American today isn’t happy with his or her current station in life, the means to change that situation are within their grasps. If they seek additional education, there are loans and grants available to help them on their journey. If for some reason a formal education is not what they want, they only have to put on their entrepreneurial hats and look for a gap in the marketplace and fill it. That’s how it works in a free market economy! If they seek a job, all they have to do is be the kind of employee they’d like to have if they owned the business, and they’ll be able to write their own tickets in most organizations.

Most of the luxuries Mr. Buffett mentioned are available and affordable to the masses today because a visionary like YOU saw the possibilities! Hard work, ambition, and a positive attitude will still yield great returns. 2009 is here and so is our future. Let’s not squander our energy worrying, but instead let’s spend it focusing on what’s possible!

P.S. – Thanks to all of you who’ve sent congratulations for our BLOG’s nomination in this year’s 2008 Okie Blog Awards! Thanks especially for clicking HERE and voting!