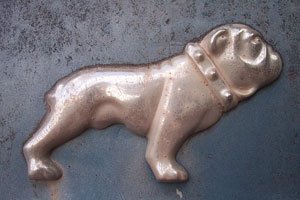 As the Mack Truck Company began to craft its brand message, they very wisely asked some of those who had used their products for their input. Mack Trucks had been used extensively in World War I, so studying the trucks’ performance under such harsh conditions was an obvious way to look at a lot of product-specific attributes.

But the real “a-ha’s” came as a result of unsolicited feedback. Soldiers shared several powerful, emotional stories about how relieved they would be on the battlefield to see the easily-recognized Mack trucks dependably trudging through the mud to bring supplies, medical aid, etc. British soldiers remarked that the very shape of the trucks reminded them of a tough bulldog, which coincidentally happens to be Great Britain’s national mascot. The rest, as they say, is history. Mack instantly adopted the bulldog as their brand symbol, placing likenesses of the rugged canine on the hoods of their trucks.

The Customer IS the answer to every marketing question! We need to be sure we have as much open dialog with them as possible, both formal and informal, and that we LISTEN when they have something to tell us. What they have to say could be worth a fortune!