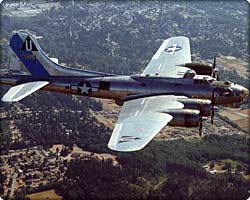 The B-17 was a powerful bomber whose contributions to winning the Second World War were legendary. The aircraft was known affectionately as the “Flying Fortress” because of its durability and firepower, and it to this day holds a special place in the hearts of its manufacturer, the Boeing company.

As stated in the History Channel documentary, War Planes of World War II, however, the idea of dubbing the planes “Flying Fortresses” didn’t come from its designers. Upon touring the Boeing plant and witnessing the first B-17s roll off the assembly line, “An awestruck reporter called the aircraft a ‘Flying Fortress,’ and the name stuck.” The B-17 stood out from the B-24, B-25, B29, B-Whichever from then on thanks to this nickname. Its identity, and its value proposition, had been developed in a simple but powerful observation.

The marketplace, or rather the CUSTOMER has all the marketing answers we need! The customer can help us design the product, its delivery, its evolution, and can tell us how to market it to other customers like them. The challenge we have is to open the channels whereby the customer can share whatever thoughts, ideas, concerns, and then be sure we listen, we act on what we hear, and we keep listening!