What should really be on your mind when you spend? (Hint: It’s what the free market is all about!) 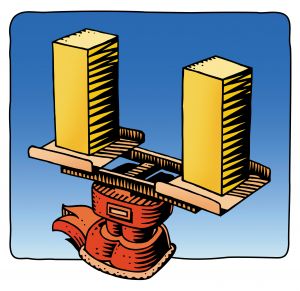 In 2007 we went all out for Christmas and bought a flat screen TV. My wife and I were so proud as we put it above the mantle so it could be the centerpiece of the room. In the summer of 2004 we had looked at plasma televisions that started around $3000 or so, so when the opportunity to own a comparable entertainment solution for only around $1400 came available, we were thrilled. Of course, to protect this great techno-treasure I spent an additional $250 at Circuit City and got the service plan that would cover any problems that might arise. An investment like that deserved to be protected, after all.

It’s bad enough that you’re probably laughing yourself out of your chair about now, so I’d rather you not send me any sales circulars that showcase much better flat screens you can buy today for around $500. I am well aware of that, thank you. Go ahead and giggle. When I die I plan to have this thing bronzed and to have it buried with me. I may even get the last laugh by making you a pallbearer!

Though it does pain me a little to think about that particular transaction, it’s actually a superb testament to the great abundance we all enjoy as part of the free market economy. As Warren Buffett once said, the average American today has it better than the Rockefellers, the richest family in the world, had in their time. When we think about how much it costs to live these days, we should probably turn right around and ask ourselves, “compared to what?” In 1960, a black and white television cost close to $1000! The sticker price of cars is higher today but look at all the features that now come standard that were expensive options years ago, if they even existed! Cars are safer to drive, less expensive to maintain, and even the most basic models should give you 100,000 miles without much worry. If you have a smartphone, you quite literally have in the palm of your hand many times more computing power than the space program owned when it made the unprecedented achievement of putting the first astronauts on the moon in 1969.

Granted, there are some items whose ticket prices cause us to complain and yearn for an alternative, and in the free market system we’ll typically get one before too long in most categories. And the delivery of that new solution will create jobs and deliver value for those who purchase it. Capitalism sure isn’t perfect, but it deserves more credit than it gets sometimes, too. It’s truly a matter of value for value!

So the next time you spend, think about all you’re really getting in return!

A cynic knows the price of everything and the value of nothing.” – Oscar Wilde