Why is Veteran’s Day personal to you and me? 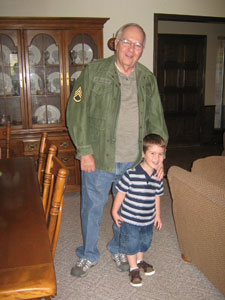 This year’s Veteran’s Day post may look a little familiar to you if you’re a long-time reader. That’s because it was originally shared in 2010. I’m offering it again because the message is still relevant, and doggone it, even 3 years later, it remains one of my favorite posts to have written. Thanks for indulging me.

To whom do we owe our thanks for the privilege of living in a free market? If you happen to be a veteran reading this, we have YOU to thank!

I think the fact that we live in a free market economy is among the greatest blessings we enjoy in this nation. You’ve probably gathered that if you’ve been a reader here for a while. What I probably don’t mention often enough is that a free market economy wouldn’t be possible without having freedom in the first place. That freedom was bought and paid for by our men and women in uniform, and we should all be constantly mindful of that as we enjoy the benefits of what they fought for.

The notion of freedom and what it costs to have it seems to get more important to me every year, especially since becoming a dad in 2007. To think that both my son’s grandfathers wore their country’s uniform is something that puts a lump in my throat, and I look forward to the day when he is old enough to really appreciate their service in our armed forces for himself. The picture to the left shows my son with my wife’s father, his Grandpa Delaine, when they took a trip to the Infantry Museum here in Oklahoma City this summer. Grandpa thought it’d be fun to put on his old uniform just to show him.

My father died when I was in college, but I took great pride in showing my son his Granddad Tom’s infantry patch at the museum. When he’s older I’ll tell him the story of how his Grandad served in World War II, how he was drafted and pulled out of high school just after he turned 18 and, like thousands of other boys who were pulled off the farms and put in uniform, he was being trained for a D-Day type invasion of Japan. The invasion was avoided by President Truman’s decision to drop the atomic bomb. I’ll tell him how his Grandad’s parents cried when they put him on the train to be shipped out because word had it that in an invasion of Japan, the survival rate for Allied Infantrymen would have likely been only 1 in 4. I’ll try to explain how men and women we may never meet put that uniform on knowing they are taking an oath to die to defend our freedom if necessary.  And I’ll probably have to tell him that it took me a long time to fully grasp what that means, and that it may take him quite a while, too. The most important thing, I’ll tell him, is that we just can’t ever forget it.

We have more abundance in this country than we can accurately measure, and the thanks we owe our service men and women can’t be adequately described. Let’s be sure Veteran’s Day isn’t the only time we salute them!

There can be no real peace while one American is dying somewhere in the world for the rest of us.” – Ronald Reagan