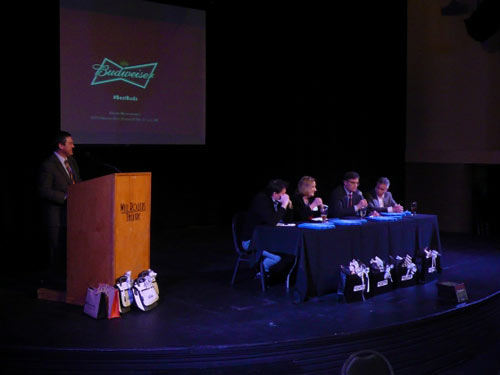 It’s over a week in the rear-view mirror, but there’s still plenty abuzz about the incredible insights offered by the 2014 Super Bowl Panel hosted by the American Marketing Association of Oklahoma City (AMAOKC).

Vice President (and soon-to-be-President-Elect) Stew Law, assembled this group of experts who offered their insights on a selection of the commercials. Stew, well done.  A tip of the hat to you, sir!

I had the honor of being asked to reprise a role I’ve had at this event before, which was to serve as the moderator. As I posted here earlier this month, I thought the overall offering of commercials at this year’s Super Bowl was as pathetic as the game itself. But there were many powerful marketing lessons to be learned from them and these panelists helped us examine many, and for that we’re all grateful. One theme they repeatedly drove home was that if these commercials don’t move the “sales needle,” they aren’t worth the insane budgets they cost to make.

I felt like giving a loud “Amen!” from the lectern, but that wouldn’t have been very “moderate” of me, would it?

This could be the last time I’m asked to moderate the panel (I’m getting a little long in the chin like my non-evil twin, Jay Leno), so if that turns out to be the case, it’ll be a good one to go out on! Seriously, it’s an honor to be asked to serve a chapter I love so much (going on 20 years now!), and a privilege to share the stage with these marketing pros, so thanks everybody!

The only purpose of advertising is to make sales.  It is profitable or unprofitable according to its actual sales.” – Claude Hopkins, My Life in Advertising