STILL a great gift idea (and now it’s even cheaper!) 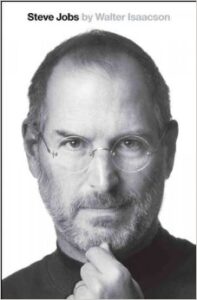 Y’know, I hate to name any one book as my “favorite” on any subject, be it business or entertainment, but if I had to pick ONE that I think everyone alive today should read, one that was so inspiring to me I found myself wishing I could get YOU and everyone you care about a copy of, it’d be Walter Isaacson’s book on Steve Jobs. I’ve been saying that for three years now!

The book is written in such a compelling fashion that it almost reads like a novel! Like some tall tale of a folk hero from days gone by. Yet Steve Jobs lived in our time and this book tells the story of the impact he had on the world during his half century on this earth. It is also very candid in its portrayal of Jobs, showcasing both his brilliance and his imperfections. According to the author, and to the great credit of Jobs himself, the no-holds-barred look at Jobs’ life was endorsed by Jobs.

Anyhow, my bet is once you pick it up you won’t want to put it down. If you don’t like to read, get it on audio and listen to it in the car on a long trip. I don’t think you’ll be disappointed!

Plus, now that it’s a year older, you can get it for a lot less! Or heck, forget buying it, just grab a copy from the library.

Rumor has it there’s a new movie in the works based on THIS book, so keep your fingers crossed!