Why McDonald’s is gonna be alright. 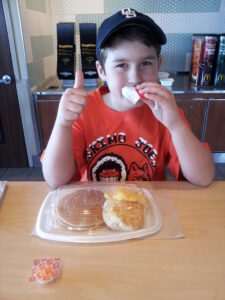 McDonald’s has gone through its share of ups and downs in its history that now spans nearly 80 years. They always seem to weather whatever storm they face, and as a shareholder, I’ve got faith that they’ll eventually get back on track.

And I don’t just feel confident about their stock price because my kid is still in “that stage” where he loves to eat there. You’ll note the happy picture of him to the left, and you’ll also note that his appetite alone should help keep their stock price stable!

My optimism about the future of McDonald’s resides in how they are doing one simple thing: They are simplifying. Again!

Here’s what I mean.

The McDonald brothers opened their first restaurant in 1937, and their hard work and customer focus helped them achieve impressive success in a short while. They found their business became even more lucrative when they simplified the menu down to just a few items that could be cooked and served assembly-line style in a rapid fashion. Their approach also helped them maintain consistent quality. Ray Kroc later bought the franchise rights to McDonald’s and systematized their simplified approach so that it could be replicated, consistently, worldwide.  The rest is, as they say, history.

Over time, in an effort to get their existing customers to spend more money with them (share-of-customer), McDonald’s has tried a lot of things to give its customers more reasons to spend more of their dining-out dollars there. Most recently this has included growing the size of their menus to add all kinds of choices. Some of this I think is a good idea. Offering wraps and other healthier options for customers to choose from. But they also added a bunch of choices within each category. Multiple burger options, multiple dessert choices, etc., etc.

The net effect is that it takes longer to train the employees in the scope of the menu. It requires them to learn more about the larger menu so they can answer questions customers have as they attempt to decide what to order. More menu items complicates the order fulfillment process. Complication may lead to errors in customer orders, which can obviously lead to customer frustration, which can ultimately lead to dissatisfaction, which can in turn lead to the customer simply deciding not to return and sharing that frustration with those in their spheres of influence. Net result: Some ugly effects on the bottom line.

Fortunately, their current CEO has flatly proclaimed that McDonald’s future is going to resemble its past in terms of its back-to-the basics approach to serving its customers. The menu is being scaled back to its most-demanded items and they are working to streamline operations and fix as many customer-reported inefficiencies as possible.

Critics say they’ve still got many threats to face, not the least of which is the mounting numbers of tough competitors. I don’t argue with that, ’cause that’s what the free market is all about, after all!

But something else I’ve learned not to argue with is the power of simplification when it comes to any system.

A successful business has to be at least competent in a good many knowledge areas in addition to being excellent in one. But to have real knowledge of the kind for which the market offers economic reward requires concentration on doing a few things superbly well.” – Peter F. Druker