This generation can’t text and buy gum at the same time? 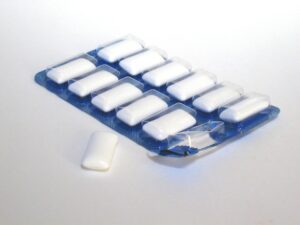 Wrigley’s says gum sales are down. Why? Largely because of technology. Yes, you read that correctly. Technology.

Most chewing gum is sold at the checkout counter thanks to its being conveniently placed right by the register as you complete your shopping experience. In days gone by, the colorful displays and packaging might catch the customer’s eye and entice a purchase. But today, buyer behavior has changed. Rather than browse the displays, shoppers at checkout stands are often preoccupied, if not completely absorbed, with their smartphones.

Recall from posts-past, such as this one, that you have two basic categories of competition. Direct and indirect. Wrigley is the leader, the dominant force in the chewing gum category, yet they are now facing their toughest competition from an indirect competitor in the form of the smartphone.

So what’s a marketer to do?

One of the nation’s largest media firms, the Hearst Corporation, has researched what areas of the store are less prone to shoppers grabbing for their phones, and have started placing magazine displays in such areas of grocery stores so they won’t have to  compete with the smartphone.  Coke and Pepsi have sought different locations in the store with these concerns in mind as well.

We can’t control the forces of the environment, but they can sometimes be predicted. By always doing your own environmental analysis, you may not only avoid being blindsided by a threat, you may be able to more quickly take actions to counter it.