The lesson of the shark and the pilot fish? 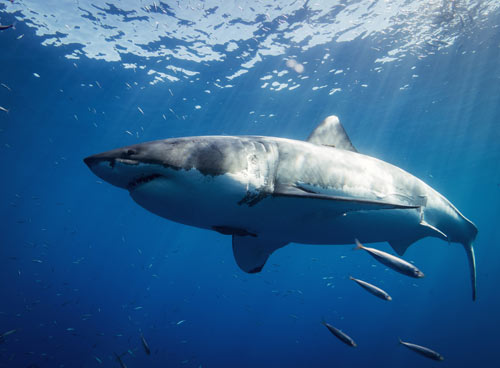 My wife and I found ourselves watching a day and a half’s worth of shark documentaries on the National Geographic channel during our safer-at-home experience. Hey, we had to something to fill the void between finishing all the Tiger King episodes, all the Tiger King documentaries, and while eagerly awaiting the forthcoming movie about Tiger King starring the multi-talented Nicholas Cage. What a wonderful time to be alive.

Anyhow, something we noticed was that often you’d see smaller sharks swimming alongside these giant, monster sharks. The explanation for this phenomenon was quickly found on Wikipedia.

Behold the story of the pilot fish:

Pilot fish follow sharks because other animals which might eat them will not come near a shark. In return, sharks do not eat pilot fish because pilot fish eat their parasites. … Small pilot fish are often seen swimming into the mouth of a shark to eat small pieces of food from the shark’s teeth.”

This reminded me of a book I read several years ago that talked about how rather than looking at the marketplace as being all about competition, maybe it would be more profitably viewed as a “business ecosystem.”

The idea is that in some cases, competitors might not really be “competitors.” If they’re careful and candid in their definitions of their target markets, there are probably significant differences in who an ideal customer is for each. So what each should do is go on the hunt for that ideal customer, and when they have the opportunity to do so, refer customers that are a better fit to those firms that can better serve them, knowing their fellow “competitors” will do the same for them. In order for this to work, of course, both companies have to be willing and active in sharing such referrals.

So it might not always be a feasible idea, heck it might even sound downright nutty at first (started to say it might sound “fishy” but I figured you’d groan at that), but I can tell you from my own experience that sitting down with firms you think are your competitors and just having casual dialogue about what customers you’re both really trying to attract can help form some very nice strategic alliances and can ultimately help grow your entire industry, which of course will help everyone’s bottom line.

At the very least, isn’t it worth having a conversation about?